General description : The sensational Jaguar XK120 first appeared at the 1948 London Motor Show to astonished audiences. This svelte and sexy show car was initially intended to be a styling exercise used to highlight Jaguar’s upcoming and advanced new XK twin-cam inline six-cylinder engine, but the response from the press and public was so positive that it took little persuasion to convince Jaguar boss Sir William Lyons to develop the car for production. Thankfully, the road going car lost none of the impact of the original show car when it hit the market.

Aside from the headline-grabbing engine, the XK120 featured independent front suspension sprung by torsion bars, with a Salisbury limited-slip live rear axle riding on leaf springs in the rear. Large four-wheel drum brakes were more than adequate for the road. But the star of the show was indeed the iron block, alloy head “XK” twin-cam six, good for 160 horsepower in standard form, upwards of 210hp in later models, and 300 or more on the race track. The “120” part of the XK120 name came courtesy of the top speed the prototype reached on a pre-production test, making it the fastest production road car of its day. The earliest cars were hand-built with alloy bodies, which later changed to more cost-effective and durable steel construction once the tooling was ready. The XK120 earned its legendary status thanks to its incredible performance and unmistakable beauty, creating one of the most iconic sports cars of all time.

This superb 1951 XK120 OTS roadster is an early production example that has had just three owners from new. It is in beautifully maintained order since receiving a high-quality, nut-and-bolt restoration to concours standards by its second owner. According to the Jaguar Heritage Certificate, chassis number 670662 is a numbers-matching car that was built on the 4th of September 1950 – coincidentally Sir William Lyons’ birthday. An early, steel-bodied left-hand drive car, it was first finished in pastel blue over a duo-tone blue interior and delivered new to D. S. Gross of San Francisco, California in the opening days of 1951. Mr. Gross used the car sparingly through his tenure, but he retained it for 33 years, only selling it as a complete, rust-free but non-driving project in 1984.

The second owner, Vincent Weatherby of Costa Mesa, California, was a well-known area car enthusiast who purchased the car for himself, recognizing the importance of such a low-mileage and original XK120 roadster. In the late 1990s, he embarked on a multi-year concours-quality restoration, returning the Jaguar to its former glory. Those who witnessed the project state that no bolt was left unturned, and every finish and detail returned to factory-correct standards. Shortly after completing the restoration in 2000, Mr. Weatherby sold the Jaguar to its 3rd and most recent owner, an enthusiast and collector from Wisconsin. Over the past 18 years, the new owners meticulously maintained the XK120, was with much of the service and detailing trusted to the renowned John Kies at Motion Products in Wisconsin.

Now presented in the striking but seldom-seen original Jaguar shade of Squadron Blue, this XK120 remains in exceptional condition today. In the years since its restoration, this car has benefitted from light and careful use, as well as extensive maintenance to ensure it is in top running order. The body exhibits excellent panel gaps and fit, and the paintwork remains in beautiful order, revealing the outstanding quality of the original restoration as well as the care it has received since. The gorgeous blue paintwork is set off by sparkling chrome knock-off wire wheels with period-correct black-wall Michelin X radials, and the rest of the brightwork also presents very well, showing only slight mellowing.

The beautifully finished cockpit features gray leather and wool carpet. It is finished to a high standard with properly upholstered seats appearing in good order, and with minimal creasing from use. Likewise, gray carpets, leather-wrapped dash, and gray door cards are in excellent condition. This car wears the correct early-style convertible top which has a more pronounced teardrop shape. At the time of its restoration, the original French gray fabric topping was not available, so this high-quality salt-and-pepper material was sourced to provide an attractive alternative. For the purist, a light gray vinyl soft top is included.

The original, numbers-matching 3.4-liter, 160 horsepower twin-cam “XK” inline-six rests under the hood. It is, of course, clean, tidy and well detailed, showing signs of regular maintenance despite the limited use. It runs very well, breathing through original twin S.U. carburetors. The four-speed manual gearbox feels tight and precise as it should, and the road manners are quite good.

The most recent owners went to great lengths to document the remarkable history of this superb Jaguar. A large file includes receipts, as well as a multi-page account of the previous ownership, the restoration work, a Jaguar Heritage Certificate, and numerous period articles and adverts. The sale will also include a full set of tools (including the jack, Thor hammer, and pouch) restored by expert Tom Buckus, as well as a custom tonneau in gray canvas, and a French gray soft top in vinyl. Maintained with little regard to cost and used sparingly, this lovely XK120 had not appeared at shows during the last owner’s tenure, and as such, would be a very welcome appearance at any JCNA concours events, regional shows, or on tour. 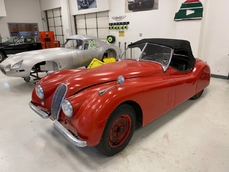 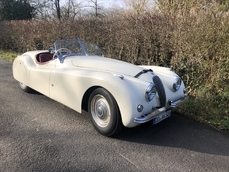 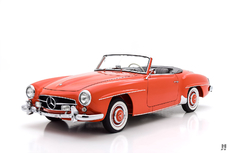 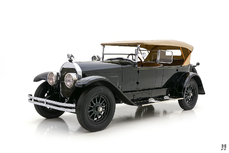 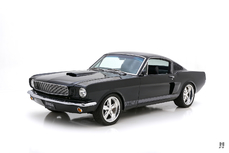 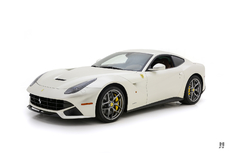 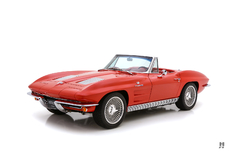