Description : Now up for grabs at the Houston showroom is this sweet 1985 Land Rover Defender 110. Known as one of the most awesome off-road machines ever produced available at the Houston Showroom, The Land Rover Defender. Land Rover was conceived by the Rover Company in 1947 during the aftermath of World War II. Before the war, Rover had produced luxury cars which were not in demand in the immediate post-war period and raw materials were strictly rationed to those companies building construction or industrial equipment, or products that could be widely exported to earn crucial foreign exchange for the country. Because of the tight financial position in this period of British Leyland (which owned Land Rover), Santana's were often better placed than Land Rover was to deal with these failings. This meant that Santana began to engineer its own solutions to common problems into the models it produced and thus arose a degree of originality in Santana's models compared to Land Rover's original products - a trend that led to the company's position today. Land Rover is known the world over for its capabilities off road. Whether it is the Sahara, the Amazon, the Mojave, or the Alaskan Outback or Defender. This British beast was built to compete with the all popular Willys-Jeep. When restoring this beauty, the owner decided to get rid of its original red paint job and go to a triple black set up. This includes a new Matte black wrap, new black carpet, and official Lucari black leather seats. Sporting a coil spring suspension all around, giving you the flexibility and power to climb those mountains tops. Coming in four different options, this particular 110 comes with an always engaged in 4x4. Under the hood of this restoration, you will notice a 6.2L V8 engine, which was taken out of a 2008 Cadillac Escalade, that is backed with a 4-speed automatic transmission giving you all the power and speed of a modem SUV but with that classic look. So come check out this 1985 Land Rover Defender 110 retromod for your self before it's too late. 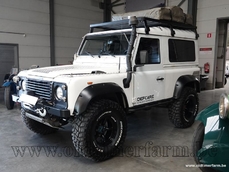 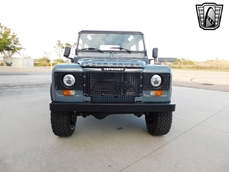 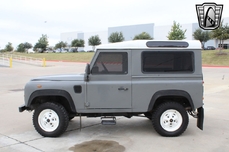