Description : Gateway Classic Cars Houston showroom is excited to offer for sale this beautiful Midnight Green 1969 Pontiac GTO. This is the real deal GTO, not a clone, and has PHS documentation. Originally an option package for the Pontiac Tempest in 1964 and 1965, the GTO became its own model from 1966-1971. The Pontiac GTO was named Motor Trend's car of the year in 1968, and the 1969 carried over the attributes that helped it win the award in 1968. The PHS info on this car backs up the configuration as being true to its original build, except for the fact that it has a performance-built 200R4 4-speed automatic transmission (swapped original TH400 out for a more highway friendly driving experience); but more on that later.

Pop the hood, and you'll find its original 400 CID V8, topped by its original Quadrajet 4BBL carb. In late 2018, the owner sent his beast to Trans Am Depot in Tallahassee for a complete drivetrain rework, along with some other enhancements. Just over $30,000 in work order receipts and almost a year later, the Poncho-loving crew at Trans Am Depot delivered a Goat that is better than it originally was, without going the complete restomod route. The results include 462 cubic inches worth of bored and stroked original engine, with heavily ported heads matched to its Ram Air III D-port exhaust manifolds, putting out almost 400 HP. The rotating assembly was balanced by Butler, intake and exhaust valves have been upgraded for unleaded fuel, new cam, forged pistons, and (of course) all new bearings and valve springs. The original Rochester Quadrajet carb was restored and treated to a "performance rebuild" by Carb Shop in Ontario, CA. The original water pump was rebuilt by Flying Dutchman in Selma, OR, and engine builder Jerry Colbuss of Pinehill Machine in Bainbridge, GA did the assembly and dyno work. The steering gearbox was also rebuilt, and upgraded to a faster 12.7:1 ratio by Marty at PowerSteering.com in Nixa, MO. Its 200R4 automatic transmission was swapped in for the original TH400, and was built to handle plenty of extra power by Tommy Boys Performance Transmissions in Thomasville, GA. A Shiftworks 4-speed shifter and retrofit shift linkage were added to make the transition to the 4-speed auto look "factory". Additional enhancements include a Pypes custom-fit dual exhaust system, RacePro mufflers, custom aluminum wheels by Year One, Michelin Pilot Sport 4S tires, a 1 1/8" front sway bar, 7/8" rear sway bar, and boxed rear control arms. This '69 GTO has also received braking upgrades, with PowerStop drilled and slotted front rotors, Hawk performance pads, and powder-coated rear drums to keep that vintage look going on for a long time! 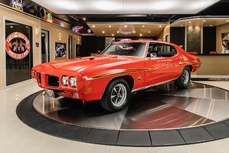 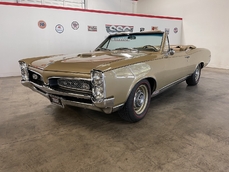