General description : Sydney Allard’s brawny J2 was one of the first and foremost British sports cars of the post-war era, targeted at the rapidly expanding American sports car market. The open-road-racing scene exploded in the USA in the late 1940s, and the Allard J2 quickly rose to prominence as a dominant competitor, particularly when paired with new overhead-valve V8 engines from Cadillac and Chrysler. While the J2 was undoubtedly fast, it also had a reputation for wild handling, and it often took a caliber of a driver like John Fitch, Carroll Shelby, or Phil Hill to tame it.

In 1952, Allard introduced an improved version they called the J2X. Outwardly similar in appearance, the J2X had a few significant alterations to enhance stability and driver comfort. Allard moved the engine forward in the chassis by 7.5 inches, which actually improved the handling balance. The front suspension and steering required significant modifications to clear the engine, necessitating a six-inch extension of the forward frame, resulting in the distinctive bulges in the front bodywork. The De Dion rear axle remained the same as before, with proven Jaguar/Lockheed drum brakes at all four corners. Drivetrain choice was up to the buyer, and most customers chose OHV V8 engines from Cadillac or Chrysler, making light work of the 2,300-pound J2X. Despite being less successful in competition than the J2 it replaced, the J2X is universally lauded by today’s enthusiasts as the most desirable all-round Allard sports car and one of the best to come from Sydney Allard’s South London workshops.

According to build records and “pink cards” provided by the Allard Owner’s Club UK and the US-based Allard Register, chassis J2X 2193 is one of the earliest J2X models to arrive Stateside, just before 1952. This car was completed by Allard on November 2, 1951, and dispatched for Motor Sport, Inc. of Pittsburgh, Pennsylvania, where it arrived about a month later. Build records reveal it left the works finished in powder blue over red leather and equipped with a black convertible top and red wheels. The build order also specifies chassis modifications for a Chrysler engine and drivetrain, which Motor Sport, Inc installed upon the car’s arrival in Pittsburgh. Interestingly, the documents show this car is early enough in J2X production that the original order sheet specifies the differences between it and a J2.

The original owner’s name is not listed, and any early competition history is not known, though it came into the care of Mr. R. Morello in 1973. Morello gradually restored the car over the years he owned it, meticulously sourcing rare original parts along the way. By approximately 1990 he had completed the restoration, finishing it in its distinctive yellow livery. By about 2010, Mr. Morello decided to refresh the restoration after a period of storage, but sadly, he fell ill and was unable to complete the project. It since transferred to the most recent owner and has undergone a light refurbishment and cosmetic freshening, and is now a complete, running/driving car presented in good working order. As offered, this J2X is an excellent basis to prepare for road events like the Colorado Grand or Copperstate 1000 and to detail or further restore to suit its next owner’s wishes. The alloy bodywork is in excellent condition, having been recently refinished in an attractive shade of light yellow that this car has worn for much of its life. Accenting the yellow paint are black wire wheels, a single side-mount spare, and a chrome roll hoop. The cockpit consists of two heavily bolstered bucket seats trimmed in black leather. The older upholstery shows some moderate patina but also possesses a pleasing character. Authentic details like the period-correct four-spoke Bluemels’s Brooklands banjo-type steering wheel, Smiths tach/speedo, and Stewart Warner minor instruments are all in excellent order.

Power comes from a 1956-specification 354 cubic-inch Hemi V8, and the engine number is consistent with it being sourced from a Chrysler 300B. Rated at 340 horsepower from the factory, this was the highest-output Hemi for that year. The mighty V8 breaths through a pair of Carter four-barrel carbs with stock exhaust manifolds. Power goes rearward via the original-style 3-speed Ford/Lincoln ‘box and on to the correct-type De Dion axle.

Allard only produced about 80 J2X Competition roadsters between 1951 and 1954, and the availability of chassis 2193 represents an excellent opportunity to acquire one of the approximately 65 known survivors. These iconic and thrilling sports cars are highly sought-after by collectors with a passion for driving, and examples are often found at the sharp end of the field in a wide array of historic driving events. Offered publicly for the first time in decades, this marvelously authentic Allard is ready for its next caretaker to join the exclusive ranks of J2X ownership. 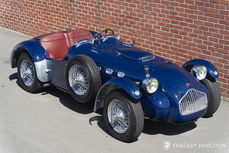