1982 Audi Quattro is listed for sale on ClassicDigest in Cigognola for €46500. 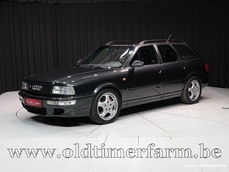 399000 SEK
Stockholm, Sollentuna
About Audi
Audi Automobilwerke GmbH Zwickau was founded by August Horch and his partners. In August 1928, the majority of shares in Audiwerke AG were acquired by Jørgen Rasmussen,the owner of Dampf-Kraft-Wagen (DKW) In 1932, Audi merged with Horch, DKW, and Wanderer, to form Auto Union. Auto Union used the four interlinked rings as their logo, the Audi badge today, representing these four brands.

After the war, Daimler-Benz had taken 100% holding in the Auto Union company by1959. By mid-sixties they had decided to sell to Volkswagen -a decision Mercedes must be regretting by now. Under VW control they took the two-stroke DKW F102, fitted it with a modern Mercedes designed four-stroke engine et voilá a new modern Audi had emerged. The rest, as they say, is history.