Allgemeine Beschreibung : Rolling into the 1930s, Buick was riding high; their confidence boosted after a series of highly successful years. The late 1920s had been quite good for General Motors’ cornerstone marque, readily achieving top-five results in the sales charts. In 1929, Buick celebrated its silver anniversary with the introduction of a line of larger and more powerful models, styled by the recently appointed head of GM’s new Art and Colour Section, Harley Earl. Unfortunately, the new design was not universally loved, and a prominent bulge along the beltline earned it the nickname, the “pregnant Buick,” however unfair that may have been. Aside from the unfounded criticisms of the styling, the 1929 models were well built and had excellent performance courtesy of a range of overhead-valve six-cylinder engines

After the troubles of 1929, Buick sought to restore their image with the introduction of a refreshed model line, complete with a simplified naming scheme. The low-cost Marquette brand notwithstanding, Buick’s 1930 lineup consisted of the Series 40, Series 50, and Series 60, with 118-inch, 124-inch, and 132-inch wheelbases, respectively. All Buicks had overhead-valve inline six-cylinder engines, and the Series 50 and 60 shared the larger 331.4 cubic-inch, 99 horsepower unit. The technical improvements paired with graceful new styling that fully redeemed the folly of the previous year.

As the flagship of the range, the Series 60 was available in seven different body styles starting with the sporty 2/4-passenger rumble seat roadster priced at $1,585, and culminating with an elegant factory-built limousine at $2,070, putting the big Buick just below LaSalle in GM’s hierarchy. All Series 60 models shared the same 132-inch wheelbase, allowing for particularly striking and well-proportioned styling, especially the two-door styles. In 2017, the Classic Car Club of America recognized the 1930 Series 60 as a Full Classic, making it one of a select few Buicks to join that elite company.

Beautifully restored and presented in a handsome blue and black livery, this 1930 Buick Series 60 is one of fewer than ten factory-built roadsters known by the Buick Club of America. This example was the subject of a high-quality, body-off, nut-and-bolt restoration performed in the late 1990s, and it has been very well maintained in the years since. In 1996, Mr. P.E. Kneedler of Rancho Cordova, California, discovered this rare Buick tucked away at a winery in nearby Placerville, California. Photos taken shortly after its discovery reveal the Buick was a complete and driving car before the restoration, albeit a bit tired with many layers of paint on the body. After removing years of old paint, the restorers found the body to be remarkably good, with virtually no corrosion in the sheet metal and excellent original wood. There was little doubt the big Buick had lived a charmed life out on the west coast. The comprehensive, photo-documented restoration included stripping and repainting the chassis, along with a complete overhaul of the driveline.

Following years of care and enjoyment with private collectors, this Buick now displays a charming character and subtle mellowing of the restoration. The main body features lovely dark blue paint, trimmed with light blue accents and black fenders. The paintwork has a warm luster, with fine detailing overall and a very slight patina from care and enjoyment. It wears numerous period-correct accessories, including dual Trippe Lights, twin side-mount spares, wind wings, cowl lamps, Mercury mascot (the god, not the car), and a truck rack complete with a covered factory accessory trunk. Chrome plating all appears in good order, and it rides on restored wood-spoke artillery wheels with whitewall tires and chrome center caps.

The sporty cockpit has room for two in front with a rumble seat for two occasional passengers. The black leather upholstery has taken on a rich and inviting character with use, showing some minor creasing on the driver’s side. The dash is painted black, with a burl walnut insert and original instruments and controls all presented in good order. Door panels and carpets are tidy and consistent with the well-kept older restoration. A navy-blue canvas top and matching trunk cover complement the paint colors wonderfully, and a set of matching side screens are included for all-weather touring comfort.

Buick’s 331.4 cubic-inch inline-six is nicely presented under the hood, painted the proper shade of dark green and detailed with period-correct hardware, wiring, and plumbing. The painted surfaces show some wear consistent with regular use, providing a good foundation for additional detailing if the next owner so chooses. The chassis and undercarriage show signs of routine running, with a moderate patina appropriate for a tour-ready example. It runs and drives well, with plenty of power and excellent road manners.

As a CCCA Full Classic, this Buick Series 60 Roadster is an ideal candidate for entry in CARavan tours and other club gatherings. It is a rare, highly attractive, and well-restored example of a very rare Classic Era Buick that is wonderfully suited to regular enjoyment. 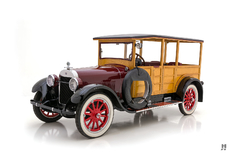 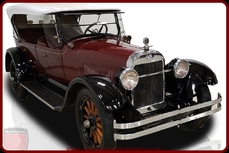