Allgemeine Beschreibung : Description
Cool classic trucks like this 1965 GMC Half-Ton stepside make for ideal hobby vehicles. With a rugged 4x4 chassis underneath and old-school looks on top, it does everything you want an old truck to do but with a lot fewer hassles. The fact that it looks great and runs better than the factory built it this way are merely icing on the cake.
If you have a stepside GM truck from the '60s, you'll probably be shocked to learn that it's such a neat fit on a 4x4 chassis, but here's the proof. At a glance, it looks like the factory built it, and that's purely intentional. They kept all the bodywork stock to give it that 1965 look, complete with the period-perfect paint job that's very close to Matador Red, with hints of orange shining through under the bright sunlight. The dramatically styled GMC "Fenderside" pickups were some of the most handsome on the road back then and if you want attention, this truck will definitely deliver. The bodywork is nicely done, but not so perfect as to erase the fact that this is still a truck that's willing to work. Gaps are about the way the factory would have done things and the paint has a great shine that's quite appropriate. The stepside bed gives it a muscular look and the cab has that small winglet up top; I don't know what it is supposed to do, but it sure looks cool. Add in some super-bright chrome bumpers, a factory grille punctuated with those big 'GMC' block letters, and a sturdy diamond-plate bed that's willing and ready to haul stuff (just watch out for the expensive fuel cell back there), and you get a truck that does everything well.
The interior is still pickup-truck basic, but upgrades are visible throughout. The bench seat has pleated cloth upholstery to make it more comfortable on long hauls and the awesome-looking woodrimmed billet steering wheel atop the tilt steering column is obviously a perk of using a late-model chassis. Just behind that wheel is a blacked-out bezel filled with a full complement of gauges that include a couple AutoMeter units, and they were in concert with the dash-mounted tachometer that minds the revs. There's an upgraded Kenwood AM/FM/Cassette radio is in the dash, but a cool cruiser like this probably deserves an upgrade and the floor-mounted shifter for the 2-speed transfer case looks like it was born there. A column-mounted shifter and cold R134a A/C highlight the amenities, and a set of later-model seatbelts add a little safety inside the cab. Black carpets on the floor help control noise and heat better than you'd expect in a vintage pickup, but we'll admit that it's still pretty Spartan inside, like all of these trucks were. But that's the real vintage look and it works really well.
The chassis underneath is likely from a later-model '80s K10 pickup, as is the case for most of these 4x4 builds, and nothing matches that lifted stance better than a great-running 350 cubic inch V8. Not dramatically modified, it sports an Edelbrock 4-barrel carburetor on an aluminum intake manifold, but they were careful to keep it closer to its production roots rather than choosing a lot of modifications. Finned Holley valve covers and Chevy Orange paint brighten things up in a good way, and you'll note there's a big radiator up front to keep things nice and cool. The engine swap also includes power steering and power front disc brakes, both welcome safety upgrades that also really help out the driving experience. For easy cruising, there's a TH400 3-speed automatic transmission and long-tube headers feed a burbling dual exhaust system that sounds suitably throaty. Newer shocks and mono-leaf front springs tame the ride quality to make this truck a pleasure to drive and the late-model 'Bullet Hole' alloy wheels and big 31x10.50-15 Falken white-letter off-road radials look exactly right.
A cool vintage pickup with a bit of a modern flair makes for a very usable package. Drive it, show it, take it to work, there's nothing this truck doesn't do well. Call today! 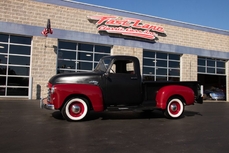 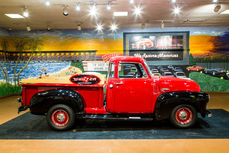