Allgemeine Beschreibung : Description
In the mid-50s, there was a revival of hand-built luxury cars that could rival anything built before the war, with Ford pulling out all the stops with the Continental Mark II to directly compete with the Rolls-Royce Silver Cloud. Not merely a Lincoln, but an entirely new brand called Continental, these magnificent motorcars were perhaps the last cost-no-object machines (Ford lost money on every unit produced) ever built by a domestic automaker and are suddenly finding a very strong market for their unique brand of luxury.
Despite the illusion provided by its exquisite proportions, this is a truly mammoth car. Weighing every bit of 6000 pounds, the beautifully built Mark II was personal luxury at its finest. And for many years, these cars languished as also-rans in the collector car hobby, but not anymore. Collectors are appreciating their wonderful combination of poise and luxury and the look is like nothing else of the era. Where every other car was laden with hundreds of pounds of chrome trim, the Mark II wears its bodywork like a tailored suit, almost devoid of ornamentation of any kind. There's the distinctive body line running along the flanks and the close-cropped roof line, so it's quite distinctive, but it's the shape that does all the talking. Finished in show-quality, special order Code D22 Silver Metallic, this elegant car certainly looks expensive in every way and is much more interesting than the more common basic white. Fit and finish are excellent, and even though these are hand-built cars that sometimes had alignment issues straight from the factory, this one was restored to a very high level with none of those problems. And although the chrome that is on this car is minimal, all of it is in great condition, including the big bright bumpers, badging, and hood ornament.
The bespoke interior is black leather that is impeccably tasteful in every way. The upholstery is in excellent condition, a testament to both quality and care through a lifetime of conscientious ownership. The instrument panel was influenced by both aircraft and clocks, with wonderfully detailed dials and levers for the HVAC controls, making for a very unique driving experience. A tachometer was standard equipment, more a curiosity than anything else in 1957, and the lovely textured face of the dash still has a bright finish. Power windows, power vent windows, and power seats were part of the package, and the upgraded R134a A/C is a very welcomed option. The original AM radio is still in the dash, too, although it's currently inoperable. The trunk, even with the propped full-size spare tire, is truly massive and has been nicely upholstered in black carpet for a luxurious look.
The 368 cubic inch V8 was ostensibly the same as those powering other Lincolns, but rumors persist that the Continental engines were specially selected and tested to ensure they were the best of the best. With a 4-barrel carburetor and dual exhaust, it's effortless but there's also a lot of mass to move, so while it's not a drag racer, it does have a feeling of inevitability and there are few finer highway cruisers. The engine was set to stock specs, and the beautifully ornate valve covers and the upscale engine enamel signify something special is under the hood. It features a proper snorkeled air cleaner, a reproduction battery, and those wild exhaust manifolds that dump out through the inner fenders. A 3-speed automatic transmission and highway-friendly gears ensure that it's comfortable at any speed and the suspension is so smooth that you hear bumps more than feel them. Big 235/75/15 wide whites are fitted to steel wheels with those ornate hubcaps that are made up of dozens of separate pieces and are worth a small fortune all by themselves.
Rare, sophisticated, and the last of the hand-built American cars, this Mark II is an absolutely dialed-in example that will only to continue to rise in value. These two-year-only Lincolns don't come up for sale very often, so don't miss out. Call today!

1957 Lincoln Continental Mark II 368 V8 is listed zu verkaufen on ClassicDigest in Dallas / Fort Worth, Texas by Streetside Classics - Dallas/Fort Worth for $67995. 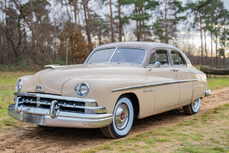 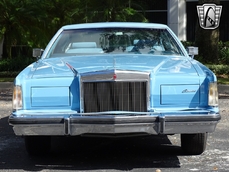 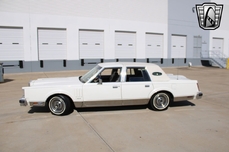 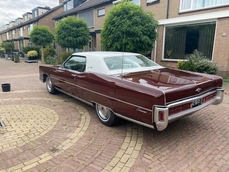 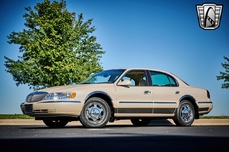