Allmän beskrivning : Description
If America's favorite off-roader is the Jeep, then Japan's is the Toyota FJ. But this Japanese-American hybrid 1968 Land Cruiser Restomod successfully crosses the Pacific with its box-shaped bodywork that's instantly identifiable on every continent. But this isn't some ordinary bruiser, with a comfortable A/C interior, powerful 6.0L Vortec V8, and a smooth-shifting automatic transmission, this is an old-world SUV that's ready for the rigors of modern day driving.
It's hard to call the FJ "styled" because it's simply the bare minimum required to carry people and gear to inhospitable places. However, that's exactly it's appeal, as a go-anywhere, do-anything kind of vehicle that has become iconic with its abilities. Judging by the name plate inside the cabin, along with the top-of-the-line build quality found throughout, this FJ was built by the pros at Proffitt's Resurrection Land Cruiser's in Western Colorado, so we wouldn't exactly call it a bare-minimum truck like so many of its rugged brother's you might see out on the trails. The Grabber Blue paint is like a signal flare, and combined with the white top and beefy fender flares, it looks absolutely awesome. Fit and finish are excellent with shiny paint and legendary Toyota build quality that you can still feel when you slam the door. I've personally owned several FJs in my life, and they don't often look this darn good. The body is rock-solid with no rust issues in the usual places, and the truck obviously hasn't been beaten to death off-road in the 3,117 miles since it was built. And although it probably hasn't seen anything more arduous than a gravel driveway, it has the hardware to drive up a mountain. There's a heavy-duty bumper welded to the frame up front ostensibly designed to push large objects out of its way, auxiliary lights mounted on top of it, and a gloss black treatment on the hood that adds a bit of contrast. In the rear you can see that the bumper is tow-ready with a built-in hitch, and there's also a gas can rack and a swing-away tire carrier with an attached jack and matching spare tire. Add the tall lift and beefy fender flares (painted steel up front and heavy-duty rubber in the back), and this beautiful truck is actually built for combat, ready to tackle any trail you could possibly throw at it.
The interior is nowhere near as bare-bones as you'd expect, with sporty high-back Corbeau bucket seats and a matching sculpted bench in back. And those aren't you regular aftermarket units, they're actually expensive heated seats and they work great! Sure, all the hard panels like the doors and dash are painted to match the body per stock specs, and there's a multi-point roll bar inside for safety, but it's easy to get comfortable in there for long hauls along the trail or on the asphalt. All the switches and controls in the dash are Toyota-spec, although the big steering wheel is a Grant GT unit, there's a fresh dash pad just ahead of it, and there's a big Tuffy center console in between the seats. All the factory gauges were replaced by a full array of AutoMeter units that are more compatible with the Chevy V8 up front, and an under-dash A/C system blows hard and cold to keep the cabin comfortable in any environment. The shifter is a Lokar unit for the 700R4 4-speed automatic overdrive transmission underneath and it's neatly integrated into the interior, with the shifters for the transfer case just beside it.
3K miles ago, the original inline-six was yanked and a modern, fuel-injected 6.0L Vortec V8 with aluminum heads went into its place under the hood. The swap was perfectly executed, and the quality of the work means that this off-roader is still just as reliable as it was originally but with about three times the horsepower. Clearly a lot of thought went into the installation, with power steering and power 4-wheel disc brakes accompanying the swap, along with a newer exhaust system equipped with a glasspack-style muffler that sounds great. A big aluminum radiator with dual electric fans will keep things under control even during low-speed climbs and service access is still quite good despite all the extra cubes. Underneath, it's still mostly Toyota, with original-style heavy-duty axles fore and aft suspended on a hefty lift with Bilstein shocks that looks awesome and adds plenty of ground clearance. Shiny aluminum wheels carry giant 35x12.5-15 Goodyear Wrangler off-road radials that look like they could climb Mt. Everest.
Go ahead, take this one out and tear up some dirt, it won't mind. Icons are like that, and with modern fuel-injected V8 power, you'll always be the first to the top of the hill. Call today!

1968 Toyota FJ40 Land Cruiser Restomod 6.0L Vortec V8 is listed till salu on ClassicDigest in Dallas / Fort Worth, Texas by Streetside Classics - Dallas/Fort Worth for $63995. 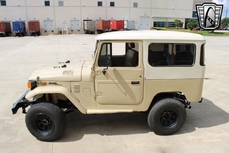 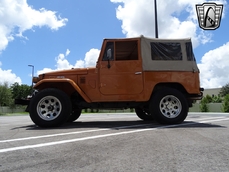 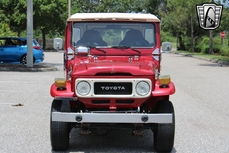