Allmän beskrivning : Description
This 1967 Jeep Jeepster marks the return of the fun 4x4 to the Jeep lineup. These had more power and usability then their predecessors, but you still get that unmistakable look of a two-tone machine built for enjoyment.
The original Jeepster was gone for nearly two full decades by the time this re-debuted for 1967. But the bright yellow and white two-tone of this one instantly reminds you of the fun spirit of the first gen. It even has the classic-looking full trim package to divide the two colors. And the full-size spare mounted on the rear bumper is always a great classic touch. But there's something else here. This has the face of its contemporary CJ, and the body deign is sleeker. Plus, those correct/classic Jeep wheels really live up to the image that the Jeepster was your fun/sporty beach machine.
The white convertible top coordinates nicely with the white upper section of the exterior, and these new Jeepsters had roll-up door windows. So this one knows how to button-up better than its predecessors. But a Jeepster is really meant to be open to the world. The roof folds back and the black snap-on boot coordinates with the black interior. The seats, carpeting, and dash pad all have a nice and deep color with a quality look. Plus, you have proper bucket seats with a floor-shift center console in-between. There's even a retro-style AM/FM digital tuner to give you upgraded driving music while still keeping the full classic atmosphere.
While the Willys four-cylinder motors helped us win the WWII, these new Jeepsters benefit for even more progress. Kaiser/Jeep picked up the tooling for the Buick V6 and made it their own. This Dauntless 225 cubic-inch motor is extremely desirable not only for parts availability but also robustness. This motor was so good GM bought it back and used it for decades, including for the turbo Grand National. You're not going to go drag racing in this stock-style setup, but it is a healthy motor with a newer large aluminum radiator. And the three-speed manual transmission puts you in firm control of all the action. Also, true to a Jeep, the 4x4 transfer case combines with the short wheelbase to let you hit the sand dunes whenever you want.
This is a cool piece of Jeep history present in all the best ways. So if you're looking for a distinctly different classic convertible, call today!!!

1967 Willys Jeepster 4X4 225 CI I6 is listed till salu on ClassicDigest in Charlotte, North Carolina by Streetside Classics - Charlotte for $31995. 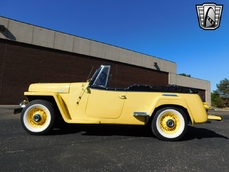 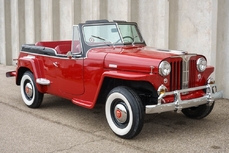 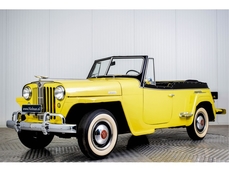