General description : 1979 Dodge Aspen Station Wagon You have just stumbled across one of the most unique and cool station wagons on the road.  Most people that stumble across this classic out in the wild remark about how cool it is followed by the question...."what is it?"  Well this nice Mopar wagon is a 1979 Dodge Aspen.  You rarely see these cars out there and if you do they are usually in a state beyond repair or one that would require an extensive restoration.  They were only produced from 1976 to 1980 with the Plymouth counterpart being named the Volare.  They offered a 2 door coupe, a 4 door sedan, and then of course the station wagon.  Apart from being a car you just rarely see nowadays part of what makes this wagon so cool is the price.  Let's face it, if you are trying to get into the classic car hobby for the first time on a limited budget you don't have a lot of options.  Then if you do find a classic in the right price range it typically comes with a lot of work and even may require restoration.  This car is done!  It needs absolutely nothing and has been entirely gone through.  The body is totally rust free and solid throughout.  The new paint is a combination of White and Tan.  An Aspen R/T model was offered and this one has that R/T treatment with the lower body color, blacked out grill and R/T badging.  On top of the paint custom pinstriping was applied to the nose, under the door handles and to the rear roof spoiler.  This adds a nice touch of customization and the striping was laid down very well.  Station wagons have a lot of windows and all of the glass looks good.  All of the chrome and trim on the car is in great condition as well including roof rack.  So throw on your luggage or surf boards and start cruising in style!  The car rolls on blacked out American Racing 15 inch Torq Thrust wheels wrapped with fresh tires.  Under the hood is a freshly rebuilt 340 V8 motor that has less than 1,000 miles on it since completed.  It is bored .30 over and features a comp cam and 550 cfm Edelbrock carburetor.  The engine compartment has a nice look and the Mopar valve covers suit the car perfectly.  It has received a new radiator, MSD ignition, and all new exhaust with block hugger headers leading to dual Flowmasters.  The motor is combined with a fresh 46RH 727 automatic with overdrive transmission that moves through the gears smoothly.  Power steering and power brakes with disc up front make the car a very comfortable one to drive.  It really is one of those you can hop in and take anywhere.  The AC system has also been converted with a new compressor so the modern R134 can be charged easily.    The interior of the car is all new.  The Tan upholstery is in excellent shape from the seats to the headliner.  You can tell it was redone and has been well cared for since.  It has bucket seats up front, which you don't always see in station wagons, and those site to each side of the original style center console.  The center console offers additional storage space, cupholders and features the added tachometer.  The dash of the car is pretty much all original and in good condition.  It has the factory gauges all of which are working properly.  Even the clock works!  The cool thing about wagons is not only do they have a back seat for extra passengers but there is a ton of storage.  This car gets taken to a lot of shows and while there the owner sets up a picnic area in the back as part of the display.  This includes a vintage Coleman cooler and some other neat stuff.  All of that is included with the sale.  If you are looking for a nice classic that is ready to roll and won't break the bank you are going to have a tough time finding one cooler than this! It could be yours for only $15,500.00! 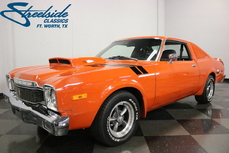 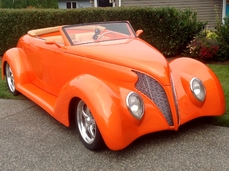 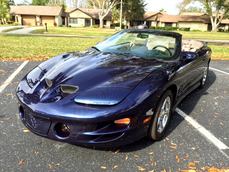 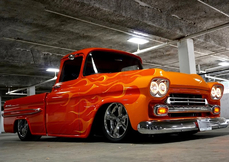 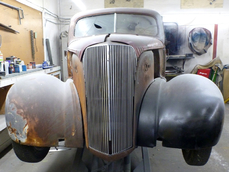 By 1920 Dodge had become the second biggest car manufacturer in the USA, unfortunately the same year both of the brothers died, the company in turn to was sold to Chrysler Corporation in 1928. Dodge found a niche Chrysler Corporation lineup above low-priced Plymouth and medium-priced DeSoto, but somewhat below the top-of-the-line Chrysler