Allgemeine Beschreibung : Description
This 1975 International Harvester Scout II is a true vintage machine. It's a rugged 4x4 that looks like it's fresh from farm duty. So since we love classic trucks that look like they have earned their keep for decades, you can really understand the appeal of such an honest and seldom-seen Scout.
International's vehicles have really found a cherished spot in the classic 4x4 world because they always seemed to build the most rugged ones out there. Today we see plenty of them where their initial industrial attractiveness is augmented by a big suspension, aggressive bumpers, and wild paint. And while this one could be taken in that direction, it seems even rarer to find such a stock style today. Clean lines, complete badging, and a solid stance just seem to fit with the IH's reputation for vehicles that endure. The well-earned patina over the entire body is the kind of look that gets real truck people excited (that's why some will pay thousands $$$$ just to get it simulated today.) The originality of this one really seems to go right down to the wheel covers. And while you might expect original skinny tires, this one has been upgraded to useful modern rubber with deep treads. The pickup truck form seems right for this Scout. After all, the patina and aged-in ruggedness just seems right on a vehicle with a versatile truck bed. And speaking of versatility, the roof is removable for those times you want to have some open-top adventures. So think of this as the rare cousin to the already rare U14 Bronco.
The gray interior has a simple but sturdy setup that's another reminder of the workman roots. The vinyl bench seat, rubber floor, and robust door cards feel quite factory and still ready to work. The three-spoke steering wheel, pedals, and floor shifters all have the proper robust mechanical feel. There is also a touch of style inside, like the way the gauges all neatly line up on the same row. Even the correct AM radio still there for display. So while there are some of you who see the potential of a full custom build from this hardy backbone, there are also some of us who just love this level of originality as it is right now.
The 196 cubic-inch four-cylinder motor is part of a long tradition of hardy International Harvester powerhouses. This was the larger version of the Comanche motor, and in fact, it's quite a large four-cylinder for the era. That's because it represents half of the related 392ci motor. Since most people have swapped their motors for an easy-fitting V8 in their Scouts, this Comanche represents another big reason why this one is for lovers of distinct classic trucks. You'll also be surprised at the list of nice driving features, like power steering, power brakes, and front discs. The two-speed transfer case and modern Falken Wildpeak tires give you true 4x4 ability. And no matter if you're on the street of trail, the three-speed manual transmission puts you in the center of all the action.
This is a true honesty with a ton of appeal. So if you love a well-earned reputation, you know this one can show it off from the first impression. Don't miss this special Scout. Call now! 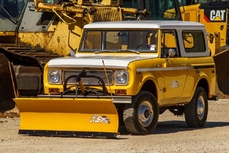