Allgemeine Beschreibung : Exterior: This 1964 Jaguar E-type series 1 for sale was repainted two years ago and the car has not been used after this. Since it was still in the very first paint, it was only repainted on the outside. Under the hood is still the original. With such an original untouched E-type, it is always difficult to decide where to draw the line. You want to keep it as original as possible and at the same time have a nice-looking car. So, after the paintwork the Jaguar also received new chrome on the bumpers. All rubber details were replaced. A set of new chrome spoke wheels were fitted. The original Jaguar E-type Series 1 wheels were saved, just like all other original bits.

Interior: It is a very original Jaguar E-type Series 1 Coupe interior in a beautiful condition. The black leather on the bucket seats are just perfect. The foam in the seats is nice and firm. Instruments look great and have all functions. In the back, it is all original. It has all the original items such as tool roll, spare wheel, handbook etc. In the 1- condition rating of this car it has been taken in to consideration that some parts like interior is original. And in my opinion original has a higher value than new, even if it is not perfect.

Engine: Since this car was sitting for such a long time, the engine had to be rebuilt. It was, for that reason, sent to U.K. for a full rebuild and feels today incredibly strong. The engine is still in the break in period. Together with the engine rebuilt, a five speed ZF gearbox was fitted to keep the engine rpm down during those highway miles.

History: One of the reasons you should buy this spectacular 1964 Jaguar E-Type Coupe is that this classic Jaguar was sold new in USA inn early 1964 to Philip True of New Hampton, CT. Philip gave the car to his son, Philip Jr, in 1972 when Philip Jr moved to Petaluma, CA. The car had just 20,300 miles on it. 1972 was the last time the car was registered for driving. Its current owner stumbled over the car in 2005 and when moving back to Sweden brought the car here the same year. The car, kept stored and completely original, was a real candidate for a careful restoration. That began in 2008 with the engine, transmission and all other mechanical. In 2010, it was mechanically done and a break in drive began. The car finally got a new paint job in 2019 in its original Carmen red. The car is impeccable in its originality. And while modern in its rebirth, it is everything in great of a driver’s car. The Jaguar E-type here for sale even has the original tools, jack and spare parts that were delivered with it when new (belt, sparkplugs etc.). Odometer reads: 20,377 miles.

1964 Jaguar E-type XKE Series 1 Coupe in red is listed zu verkaufen on ClassicDigest in Saxtorp by Classix by Schiebler Scandinavia AB for €138000. 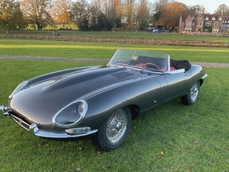 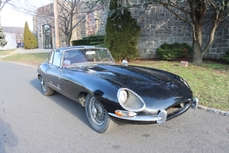 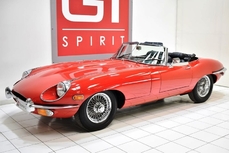 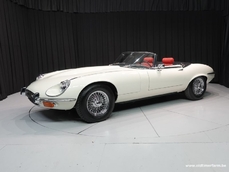