A tool room copy of the original with a nicely patinated aluminium body.

Built in the late 1980s, this XK SS takes its identity from a 1967 Jaguar E-Type, chassis number '1E1944', which was registered in the UK as 'PEH 670F'. Of riveted aluminium sheet, the coachwork conforms to the original method of construction. Unlike the original, however, the Lynx XK SS is powered by a larger, 3.8-litre XK six fitted with triple-Weber induction and a stainless-steel sports exhaust system. (Its original engine was a 4.2-litre XK unit taken from a Series 1½ E-Type.) Finished in British Racing Green, the car also features competition wheels and a nicely patinated black leather interior.  Indeed the perfect level of patination lead people to ask if it is the real thing when viewing it.Previously owned by Roland Urban, founder of the French Jaguar Drivers' Club, the XK SS was completely overhauled in the early/mid-2000s and was purchased by the previous onwer in 2008. In 2009 the engine was overhauled by Paris-based Cecil Cars, while earlier this year the car received new tyres and the carburetion system was overhauled as part of a general check over (see invoice on file for €4,617 from Prestige Garage in Vence, South of France). Offering breathtaking performance with classic Jaguar style, this beautifully executed XK SS re-creation comes with a valid French Carte Grise but we can also UK register it if preferred.

Please note that Frank Berger, CEO of Lynx Motors engineering has confirmed that the car started life as number 3 short nose D Type built by LYNX in 1977. The car was then converted by LYNX into a LYNX XKSS in the 80s. Being the first Lynx XKSS built, it is the Lynx XKSS prototype and according to Frank Berger, one of the most important LYNX ever built (email on file). One of 15 cars built, Lynx motors engineering limited will be happy to issue a certificate to the successful bidder.

Driving this car is a real experience.  It is extremely fast, very light and direct on the steering and makes absolutley all the right noises.  Testing an XK SS in 1957, the esteemed American motoring journal Road & Track recorded figures of 5.2 seconds and 13.6 seconds for the 0-60mph and 0-100mph times respectively, which are none too shabby even by today's standards. With an estimated top speed in excess of 150mph, the XK SS remained the fastest catalogued Jaguar sports car for many years.  This car with its larger tuned engine is considerably quicker then the originals are.

One of the rarest Jaguars of all, the XK SS was a spin-off from the D-Type racing programme. To satisfy the FIA's sports car regulations, the D-Type had been built in numbers greatly exceeding the demand for such a specialised piece of racing equipment, and conversion to road trim was viewed as the best way of clearing unsold stocks, hence the XK SS. The idea of a road-equipped D-Type is credited to Jaguar works driver Duncan Hamilton, who fitted a windscreen and hood to his ex-factory 1954 Le Mans car ('OKV 1') in 1956.Modifications to make the D-Type acceptable for road use included installing a seat and door on the passenger side; removing the division between driver and passenger; fitting a full-width wraparound windscreen; and heat-shielding the side-exit exhaust system. A mohair hood and detachable side screens provided weather protection, and, as twin fuel tanks and the spare wheel occupied the boot space, a luggage rack was provided on the tail. The 3.4-litre XK engine remained pretty much to racing specification, producing around 250bhp, which, in a car weighing just 18cwt (914kg), made for electrifying performance. Production commenced during the winter of 1956, but the loss of a number of bodyshells in the fire at the Brown's Lane works in February 1957 severely curtailed the XK SS programme, with the result that only 16 had been made when production ceased in November of that year.

1967 Jaguar XKSS By Lynx is listed zu verkaufen on ClassicDigest in Essex by Prestige House for Preis nicht verfügbar. 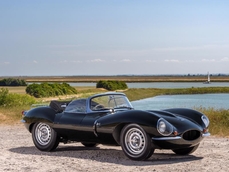