Allgemeine Beschreibung : When Packard introduced the 115-C Six in 1937 they hadn't built a six-cylinder car since 1927. Effectively, even through the darkest days of the Great Depression, Packard just didn't know how to build a "less-expensive" Packard. That changed in 1935 with the introduction of the One-Twenty, a medium priced car with Packard quality and details like independent front suspension and four-wheel hydraulic brakes that were in the forefront of American car features for the time. The One-Twenty vastly outsold senior Packards in 1935 and 1936 and made the 1937 introduction of the 115-C Six a logical next step.

Built on a 115" wheelbase, 5" shorter than the One-Twenty, with a 237 cubic inch L-head six-cylinder engine based on the One-Twenty that still made an honest 100hp, corners were cut in trim and accoutrements but compared with the $1,250 price of a One-Twenty convertible coupe the 115-C Six cost only $910, a tremendous value when a 1937 Ford Deluxe Club Cabriolet with 85 horsepower cost $760, just $140 less than the prestigious, comfortable and powerful Packard Six.

This 1937 Packard Six Convertible Coupe has been treated to a restoration and subsequent care and attention above its pay grade. It is, in our experience with it, a fine driving and most enjoyable automobile.

The livery is a rich Maroon complemented by matching wheels with trim rings and hubcaps mounted with whitewall tires. The body is accented with a cream coachline and bright red side hood vents. The upholstery is dark red leather under a tan cloth top. There are rollup windows for weather protection and there is a rumble seat for friends and family.

Paint and panel fits are lovely, with minor edge chips. The chrome is bright. Upholstery and door panels are barely used, only lightly creased and not scuffed. The dashboard has a full complement of crisp factory instruments, gauges and clock set in a burl woodgrained panel. The engine compartment has been restored and is clean, orderly and dribble-free with only modest signs of age and use. An accessory Ampco vapor lubricator meters a little "top-end" oil into the carburetor. The radiator, fan and water pump are new.

This is a super-nice driving Packard with a quality restoration, excellent preservation and ample performance at an affordable price that will hold its head high among even its eight-cylinder Packard counterparts. 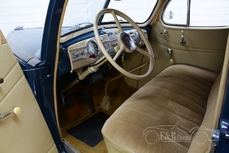