Allmän beskrivning : Since the end of Silver Ghost production in the late 1920s, the Phantom name has been the reserve of Roll-Royce’s largest, most opulent flagship models. The first post-war Phantom was the highly exclusive Phantom IV, of which Rolls-Royce built just 18 for Royalty and heads of state. The Phantom V was considerably more ubiquitous, with over 800 produced between 1959 and 1968. It was also the first time Rolls-Royce offered a “standard” body design on the Phantom range, with most buyers selecting one of two styles from Park Ward or James Young and often with custom variations. The Phantom VI arrived in 1968, and while visually similar to its predecessor, it offered a restyled and improved dash fascia and mechanical refinements shared with the new Silver Shadow series, including the 6.2-litre V8 engine, though it would be the last Rolls-Royce to use a separate body on chassis. With only a few exceptions, the standard coachwork was by Mulliner Park Ward, and again with variations including the semi-open State Landaulet. Pricing reflected the car’s exclusivity, and just 374 were constructed, though production lasted until 1990 when the somewhat less grand Silver Spur Touring Limousine took over as the flagship.

According to records provided by the Rolls Royce Enthusiast’s Club, Phantom VI chassis PRH4836 was built to order in 1975 for Mr. T. Takasaka of Cornes & Co. Ltd, Tokyo, Japan. The impressive spec is befitting a factory-built limousine, with additional equipment including foglamps, flag mast on the left-front wing, Fiamm air horns, provision for television in the rear, Quadraphonic tape player, intercom system, reading lamps, and more. It also has controls for the rear air conditioning and stereo fitted to the left and an electrically operated back seat. The build order notes Mulliner originally finished it in Silver Chalice with gold fine lines and beige leather upholstery.

It is not clear exactly how long it remained in Japan; however, records do indicate it was in the hands of the most recent owner in the late 1990s. It has since received a very high-quality respray in a beautiful shade of fine metallic Claret, finished to a high standard over crisp coachwork. All four doors open and shut with satisfying precision, and the panel fit is exemplary. Likewise, the exterior brightwork is excellent, and it retains the original rectangular Lucas fog lamps, flag mast holder, and correct color-keyed wheel covers. Per the original specification, it rides on black wall Dunlop Fort 8.90-15 tires for the proper handling, ride, and stance.

Befitting a factory-built limousine, the cabin is appointed with a host of luxury fitments. The original Connolly leather trim is superb, as are the carpets and mouton wool over mats. The woodwork is also in lovely order and is consistent and beautifully presented in excellent original condition. The central bulkhead features a powered glass partition and houses the original bar and television cabinet. Documents from the original order specified a compact Sony color TV, which was only available in Japan, so it was shipped without a TV and with installation instructions instead. It has since been updated with a later style unit and DVD player. Otherwise, the cabin remains true to original specifications, including the rear a/c controls, opera seats, four individual map lights, and more. It is a wonderful expression of traditional British luxury, benefitting from exceptional care over the past 46 years.

As one of just 374 produced, the Phantom VI is a rare sight, indeed, and this particular example stands apart thanks to its superb paintwork and exceptionally well-preserved original interior. It has been properly cared for by a noted marque enthusiast and collector and remains in fine running and driving condition, ready for a wide range of touring and concours events worldwide.

1975 Rolls-Royce Phantom V I Limousine is listed till salu on ClassicDigest in St. Louis by Hyman Ltd. for $227500. 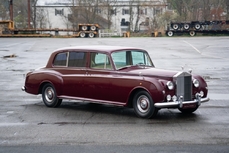 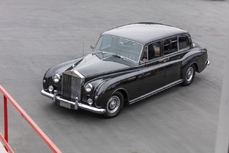 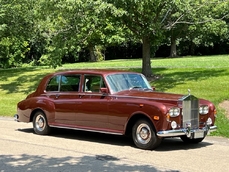 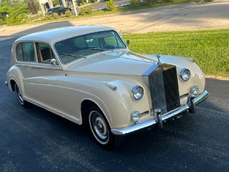 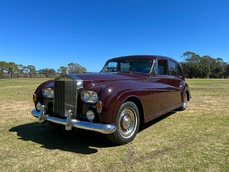