The car was commissioned by Rolls-Royce in the Spring of 1953 intended for Franco-Paris Automobiles and to have a James Young touring limousine body built on a long wheelbase left-hand drive chassis with automatic transmission, the first on a Silver Wraith, for exhibition at the October Paris Motor salon, but F-B cancelled their interest and R-R changed the specification to right hand drive. On completion it was flown to the Paris Motor Show. Original R-R publicity photos are available.
The beautiful limousine body style WRM30A (page 240 Bernard King’s book) was completely hand built in aluminium and is very rare being one of only seven in this style.
On return it was sold to a Mr. Lilley of Lilley & Skinner, Shoe Manufacturers in London, but seems to have been for the use of his wife, Vera. She was a white Russian refugee who had fled the revolution with her family in 1917 with jewels sewn into her petticoat. She married four times, three to English Millionaires.
Many modifications to the rear compartment were made to Mr. Lilley’s requirements including upholstery in fawn cloth with seat and door covers, still extant, and incorporating two very small sideways facing occasional seats which appear never to have been used, but they double as foot rests when folded away.
The woodwork is heavily figured walnut which, owing to the car’s history, has not faded. There is an electric division with the front trimmed in cream leather.
The car was wholly chauffeur driven until November 1958 when Mr. Lilley took delivery of a new Silver Wraith HLW30 by James Young as its replacement.
The car remained with Jack Barclay before it was then purchased by a lady from Surrey who did not like the original Cadillac Green and had the whole car repainted Mulberry. This seems to have been very comprehensive as there is no indication of the original green.
In September 1959 it was lent to Elizabeth Taylor for her honeymoon to Eddie Fisher in Surrey before they embarked on a European tour.
The car continued to be chauffeur driven for the lady who had a country house in Surrey and a town house in London but after both political unrest and financial restraints from 1962 the car was no longer used and in 1964 was fully de-commissioned, the brightwork was greased, the interior mothballed, the vehicle stood up on axle stands, covered and locked away.
Come 1999 the lady decided to sell this stunning vehicle. It was brought to running order, MOT'd and went to Jack Barclays for sale.
The current owner acquired the vehicle in 2001 and was the first person to use it for 35 years, and had just 62,000 miles recorded.
The vehicle was acquired and completed a thorough re-commissioning and servicing of all mechanical components and had the top half of the body resprayed in champagne colour. The lower half was subsequently re-sprayed, owing to the 1959 paint cracking on the aluminium bodywork and not through corrosion, in 2009. Most chromework was rechromed.
The interior is complete with all original and apparently unused fittings, pewter flasks, cut crystal glasses, tonic and ginger ale, mirror, clothes brush and cigarette case. The seats and doors retain their original covers as they are virtually unworn. There is an extensive original fitted tool kit and Dunlop jack.
In 2002 the vehicle was invited to take the car to Windsor Castle to parade for Queen Elizabeth and Prince Philip at the start of their Golden Jubilee celebrations with photographs kept in the history file.

We have the comprehensive build records from Rolls-Royce and James Young the coachbuilder detailing almost every hour and every item of material and its cost that was used in the construction of the body and the interior fittings. These records continue to 1958.

Under the current ownership the vehicle has had light use and been regularly serviced requiring no major work.
A new tail pipe section and downpipe were fitted in 2013 and have just had the chassis, which was dry, cleaned and painted, the engine bay cleaned, a new battery fitted and a four new Firestone 7.50 x 16 cross-ply tyres fitted, which maintain original ride height whilst providing excellent road holding and comfort.

1953 Rolls-Royce Silver Wraith is listed till salu on ClassicDigest in Essex by Prestige House for Ej prissatt. 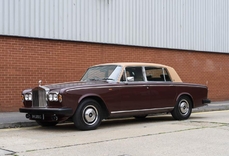 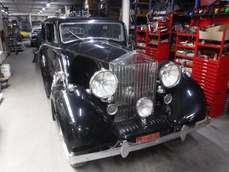