Allgemeine Beschreibung : Vintage and Prestige are proud to offer this 1951 Lagonda 2.6-Litre Drophead Coupé For Sale.
Registration no: NKL 666
Chassis no: LAG/50/210
Engine no: LB6A/50/266
Mileage: 37,000
It's said that when David Brown acquired Lagonda in 1947 all he got was a famous name, a collection of engineering drawings and a handful of prototypes. And although Lagonda's chief engineer and designer, the great W O Bentley, quit the firm when Brown took over, he did leave behind the 2.6-litre, six-cylinder, twin-overhead-camshaft engine that would power the Aston Martin DB2 and the next generation of Lagondas.  Although it retained a separate chassis, Bentley's 2.6-Litre Lagonda was advanced in other ways, featuring independent suspension all round: by double wishbones and coil-springs at the front - a layout similar to that adopted on the DB4 - and semi-trailing arms at the rear where the brakes were mounted inboard to reduce un-sprung weight.
It had been intended that the new Lagonda would exploit a perceived gap in the luxury car market between Jaguar and Rover at one end and Rolls-Royce and Bentley at the other. W O's design succeeded brilliantly in this, being able to carry five persons and their luggage at high speed and in great comfort.
One of Lagonda's, and David Brown's, greatest assets was stylist Frank Feeley, the man responsible for the Italianate flair of the DB2, and while Feeley's 2.6-Litre looked back nostalgically at the Lagondas of pre-war years, his prototypes produced on that chassis in the late 1940s hinted at the 3-Litre model to come.  Chassis number 'LAG/50/210' was supplied new to one Frederick Packer of Sittingbourne Kent, the next ownership remained in Kent and changing hands to Thomas Gurney. It is believe that a re-spray was commissioned under Mr Gurney’s ownership.
NKL 666 then moved North and resided is the Skopos Motor Museum (now the Yorkshire Motor Museum), this is where she stayed until be purchased by the current vendor in 2001. Since the purchase in 2001 the Lagonda has been cared for, maintained and preserved. Less than 700 miles have been covered in the 18 years of ownership and she is still cruising along the road magnificently.
In our showroom and ready for viewing. 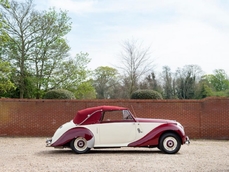 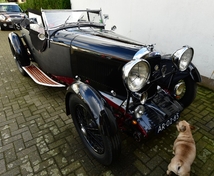